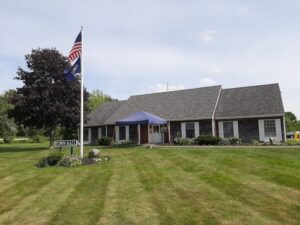 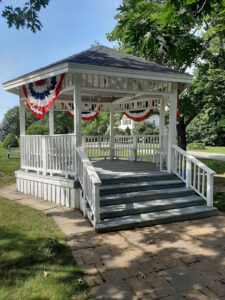 Greenland is located in Rockingham County, New Hampshire.  It’s bounded on the northwest by Great Bay and located south of Portsmouth.  One of the earliest settlements in the State, Greenland was a parish of Portsmouth (then known as Strawbery Banke) operating in 1638.  Captain Francis Champernowne moved from Strawbery Banke in 1640 and settled in the area of the present Portsmouth Country Club.  Although it was originally going to be named CANARY, Captain Champernowne named his farm GREENLAND.  His extensive landholdings included a farm which is now the Town of Madbury, named for his ancestral home in Devon, England.

Residents requested, and were granted, a separate parish in 1706.  In 1710, Captain Samuel Weeks constructed a substantial brick house, thought to be the oldest brick house still standing in New Hampshire.  It survived the earthquake of 1755; only the 18” thick beams that supported the structure were cracked during the quake.  Greenland would incorporate in 1721, and annexed parts of Stratham in 1805 and 1847.